Covid-19 has not yet affected our operations. Tensa4 orders ship from 1-7 days after receipt, depending on current order volume. Should any quarantines or similar affect shipping times beyond this, we will offer to refund outstanding orders. Thank you and stay safe!

Our Tensa Solo hammock stand hasn’t gotten as much attention as Tensa4. It may be less striking, but Solo is the ticket when you need a much lighter, more compact solution than Tensa4. It’s cheaper, too! Solo’s relative obscurity stems partly from our prior lack of many good photos of it in use, pictures being worth a thousand words. Now that we’ve gotten a fair number out into the world, customers are starting to post great stuff: 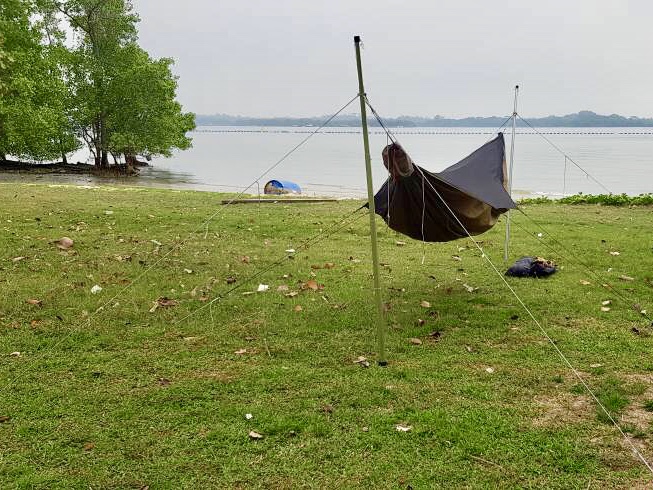 Which should you choose, Tensa4 or Tensa Solo? It comes down to reliability versus portability. Tensa4 is extremely reliable, able to be set up indoors or out, but at 10-13 pounds, it’s not suitable for backpacking. Tensa Solo at only 2.3lbs (1.04kg) per side is pack friendly, but you must be able to set down strong anchors, two per side, making it less reliable in uncertain ground conditions. It’s still very likely to work in most places, but that last lacking measure of confidence can loom large when you depend on a hammock for rest and shelter.

You don’t have to choose: you can convert one Tensa4 into four Solos with our Conversion kits, so you can have both at far less than the cost of buying separately.

If you suspect that the ground you’ll be trying to pitch in is extremely hard or rocky, you may want to use heavier metal hammer-in nails instead of the Orange Screws we include, which work best wherever they can be driven in. It’s not a matter of one being better than the other generally, but of suitability for specific conditions. More tips:

2 thoughts on “Tensa Solo in photos”